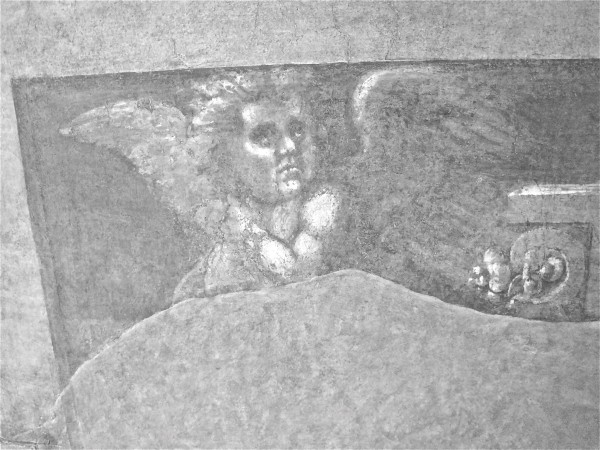 Anna took me to three sites, rarely frequented by tourists, to discover the work of Andrea del Sarto.  He was a High Renaissance and Early Mannerism painter whose work was eclipsed by Leonardo and Michelangelo.

First we visited the Chiostro dello Scalzo where there is a series of gray on gray frescos, (style is known as Grisaille) depicting scenes from the life of John the Baptist. The cloister was bathed in golden light and we were alone in the room. The frescos were so detailed that they resembled sculptures or carvings in stone.

Next we went to the Basilica della Santissima Annunziata ( in the  same piazza as the  Ospedale degli Innocenti , the  first European orphanage) Del Sarto made a series of frescoes in the portico of the church but I was not able to photograph any because they were being restored and mostly hidden by scaffolding.

Our last stop was the Chiesa San Salvi, in a Florence suburb, where we viewed del Sarto’s later work, The Last Supper. Del Sarto and his wife are depicted in this fresco looking out a window at the top. Much has been written of del Sarto’s wife, Lucezia. She appears in many of his paintings, often as a Madonna. However, Vasari describes her as “faithless, jealous, and vixenish with the apprentices.”[ She is similarly characterized in Robert Browning’s poem. However, there was gossip that Vasari was madly in love with her and tried to coax her to leave del Sarto for him. He was not successful so perhaps he attempted to blacken her name in revenge.