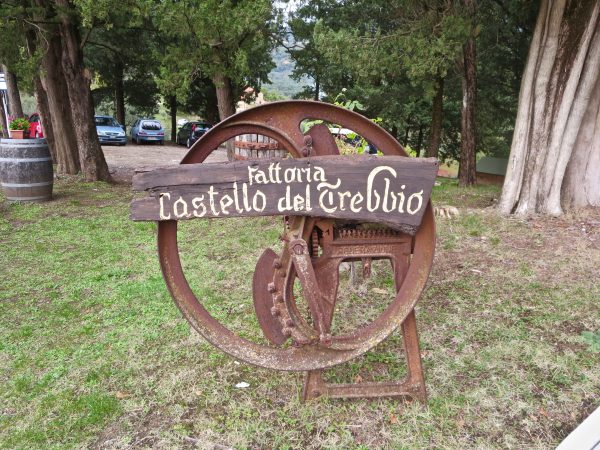 Spoiler alert! Expectations exceeded! Now you can relax and read on. 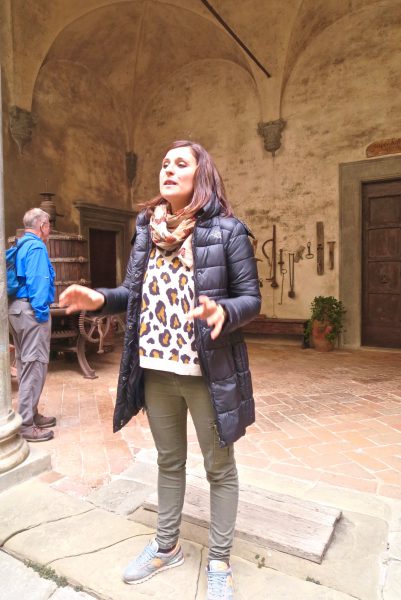 Marta, our guide, spoke English with a slight Texan accent.  She explained: “I meet so many Americans, I’ve picked up their accents. I’m like a chameleon with languages.”

Marta first showed us the courtyard of the castle and explained the castle’s history. 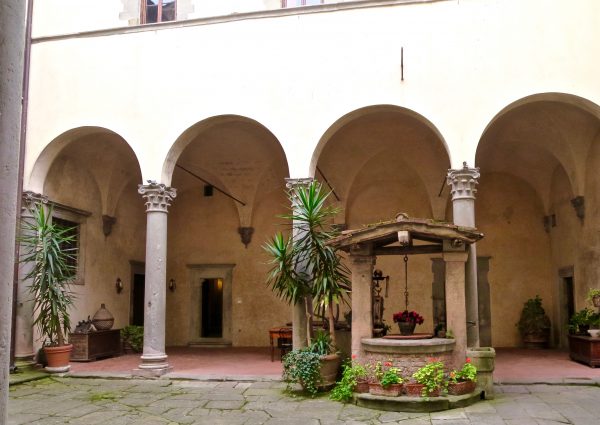 Courtyard to the castle

“The Pazzi family used to live here and in 1478 the family masterminded the infamous plot to murder Lorenzo Medici and his brother Giuliano while they were attending church in Florence. In a few minutes, I will take you into the magnificent conspiracy room where the plot was hatched.” 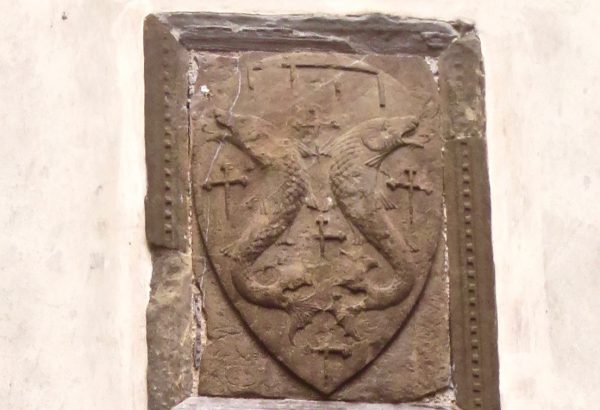 The Pazzi stema, still in the courtyard

In 1968, Count and Countess Baj-Macario bought Castello del Trebbio, which was in a state of abandonment. Countess Eugenia restored the buildings and planted vineyards and was soon marketing her wine. Since her death in 1990, the property has been run by her daughter Anna and Anna´s husband Stefano Casadei, who is the estate’s winemaker. Stefano is one of Italy’s leading viticulturists.

The castle has 39 rooms and today has only two inhabitants. We will have our cooking class in the family’s private kitchen and eat in their dining room.

We were not allowed take photos inside the castle but the rooms we were shown were lovingly restored and furnished with antiques that reflected the era. The conspiracy room sported a few couches, that looked invitingly comfortable but I refrained from sitting. 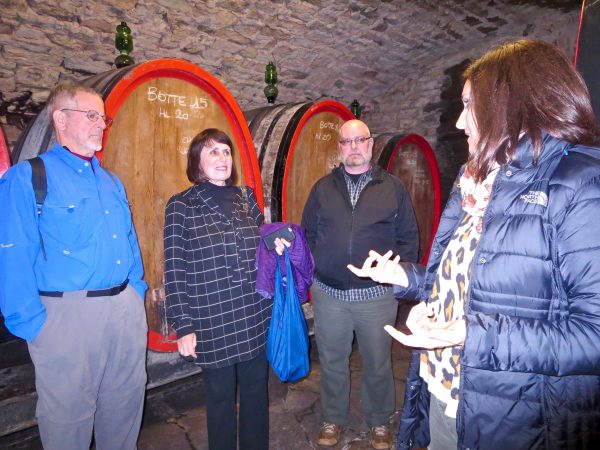 In the cellars with Marta

Next Marta took us into the wine cellars, also from the early days of the castle, where they were used as the cold rooms for food storage. We also visited the dungeon where the hooks hanging from the low ceiling inspired our imaginations.

In the room where the terra cotta amphorae were still present, we learned about the castle’s current olive oil production as well as the basics of olive oil.

The most important lesson for me was to make sure there is a date on the bottle because olive oil only lasts for 18 months then it goes rancid. In North American supermarkets, we rarely see olive oil that is dated. Also, olive oil needs to be protected from the light and should be stored in dark glass bottles or the ubiquitous green tins that we see here in Italy. Good olive oil is expensive because of the work that goes into the production and the low yields of the olives themselves.

Now it was finally time to meet our private chef, Jerry. 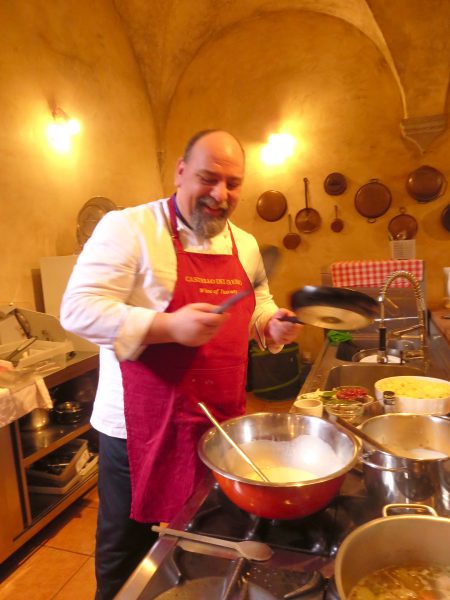 The kitchen was spotless and organised with very simple tools, very unlike our gadget heavy North American kitchens.

First, we made a traditional Florentine cake called “Schiacciata Alla Fiorentina”, brilliant in its simplicity.

Next, we all were invited to help with concocting the crepes Fiorentina, that involved a béchamel sauce, a ricotta and spinach filling, as well as a tomato sauce. 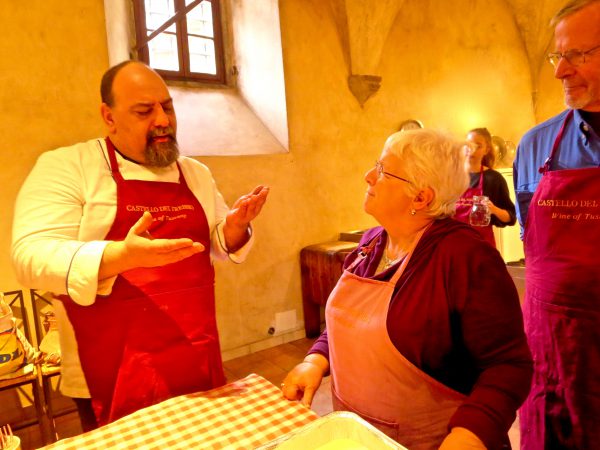 The main course was Chicken wrapped in pancetta with Vin Santo and potatoes. 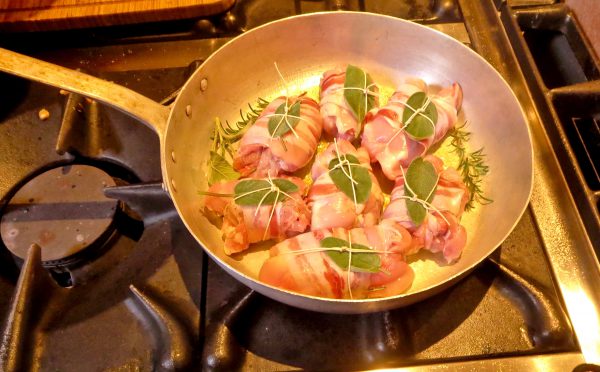 This was the most delicious and simple dish! 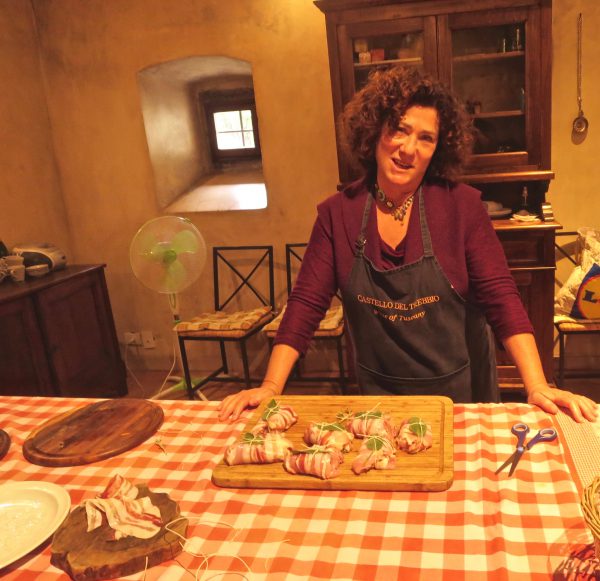 I am very happy!

Are you hungry yet?

If you private message me I will send you the recipes. If enough people are interested, I will post them here. 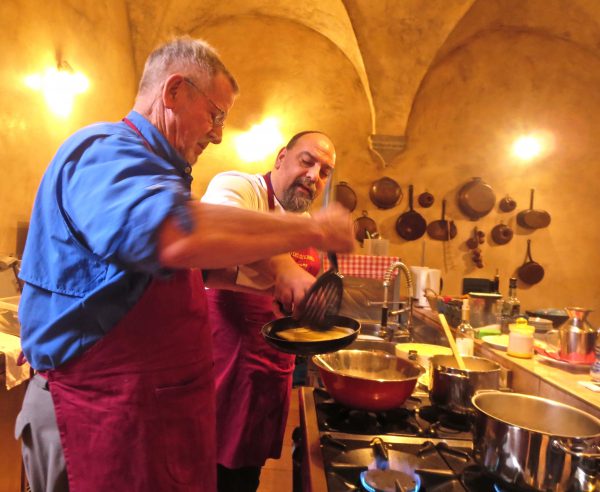 Lastly, we made Liver pate (chicken livers, anchovies, capers, Vin Santo, herbs, oil and butter) to be served on crostini.

We were escorted into the dining room, where a welcome fire blazed.  Before we were served lunch, we sampled several of the estate’s wines, all exquisite. 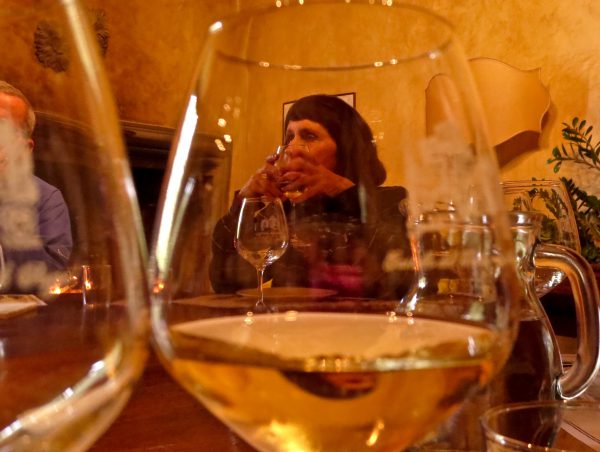 Wine tasting in the dining room

And I can only tell you that the meal we helped create was one of the most memorable meals I have ever eaten.

I will try to re-create it when I return home and attempt to do the recipes justice. 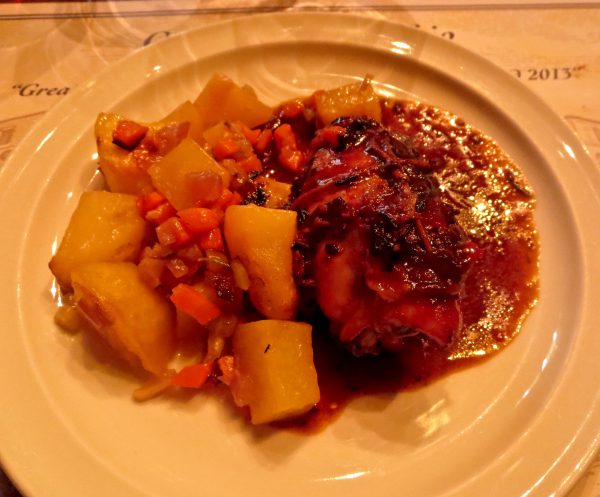 Our chicken and potato dish

This day was one of the best of our trip and I look forward to returning with my next group.

Nancy, Leann, Dorothy, Mary and Angela, are you ready?