Welcome, Joe and Kris, Mark and Jerome and Bob and Sue! ( and a surprise guest visit from Mr. Daniel Abbott) 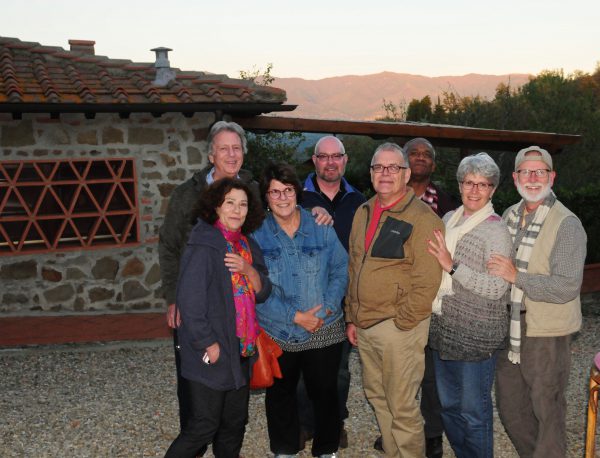 It’s amazing that all three flights from different European airports all arrived on time in Florence. First came Jerome and Mark, then Bob and Sue and finally Chris and Joe. No one ended up in Bologna and all luggage made it!

After meeting Giovanni and learning all about Il Colle wine and olive oil (and much, much more!)
we had dinner and then jet lag took its toll. Slowly everyone retreated to their rooms.

Cristiano, our driver, drove us to Castellina in Chianti to Gelateria Antica Delizia for a behind the scenes gelato tasting experience.

After, we strolled through the town to regain our appetites in time for lunch at my favourite restaurant, Le Panzanella in Lucarelli.
This group kept laughing and bravely enjoyed eating rabbit, chicken liver crostini and cinghale. Our driver Cristiano laughed along with us and we all learned some new words.

After lunch, we visited Nora at the Chianti Cashmere Goat farm. We met some of the goats and their guard dogs (who protect them from wolves) and learned about the process of making cashmere.
Mark, who is a master lace maker, may collaborate with Nora in the near future.

On Monday, we spent the day in Lucca. Bob had asked me to try to make an appointment to visit the studio of Daniela Forti, a glass artist whose studio is open by appointment only.
This meeting was so much more than a gallery visit! Not only did we see the studio, but had a tour of the palazzo which belongs to her family, The Tucci’s. We learned about this noble family’s history. Thank you for suggesting this Bob!

Tuesday means Market Day in Figline, so we drove down with Malo, our neighbour and a good friend.
We had lunch at her farm, Poggio Pratelli

Then we learned about all the things she creates from her land: olive oil, saffron, cosmetics from Iris, and unique baskets that she sells all over Europe in the artisanal markets. She also has two apartments that she rents out via Air B&B.

On Wednesday, we travelled to Siena and then San Gimignano. Joe took at least 500 photos, which meant the rest of us could relax and know that everything would be well documented.
In San Gimignano, I visited the Torre e Casa Campatelli recently restored by the FAI ( Fondo Ambiente Italiano) and it was such a great experience! I got a bird’s eye view of one thousand years of history in Tuscany by being in a family’s residence. If you go to San Gimignano, this is a must see!

Breakfast on Thursday was wine tasting with Stefano in Panzano, then on to Montefiorelle for a visit to Altiero, a small family-run winery, where we also had a delicious lunch. It was like eating with your own family, but better: we didn’t have to help nor did we have to deal with any family issues. Then a stroll through the town and a quick stop in Greve.

Up, up. into the Apennine mountains on Friday to stop by the Valenbrossa Monastery.
Then lunch at Cristina’s where we were joined by her husband Luca and Antonio, Cristina’s 98-year-old father.

Saturday, we had a tour of Castello del Trebbio, once the home of the Pazzi family whose name is synonymous with conspiracy. The Pazzi conspiracy was a plot in 1497 by members of the Pazzi family and others to displace the de’ Medici family as rulers of Renaissance Florence. Now it is the family home (castle has 39 rooms!) of Anna and Stefano Baj Macario who make wine, olive oil, saffron and host weddings.There are many castles in Italy, but most are now hotels or restaurants rather than private family homes. We toured the wine cellars and some of the castle’s rooms before our cooking class started. Gerry put us through our paces as we made a four-course meal (crostini, crespelle Fiorentina, chicken in vin santo, potatoes and other vegetables and my favourite dessert, Schiacciata Fiorentina

In the morning, it was time to say goodbye to Il Colle and move to Firenze, where we are now, at Casa Thiele. 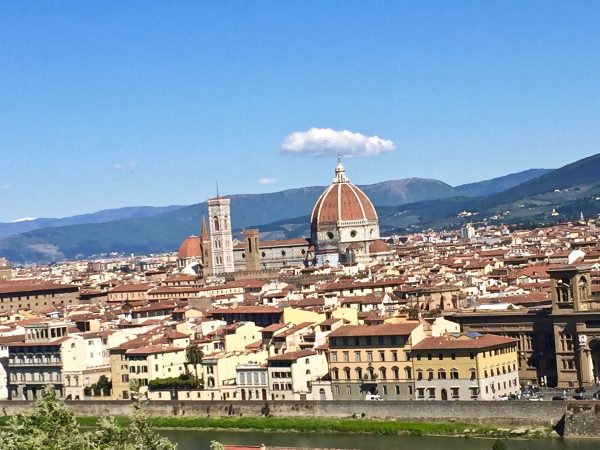 7 thoughts on “Travelling with the Fun Family!”