Here’s a story I wrote in the ’90’s,  after I moved from the city ( San Francisco) to the country (Orinda)

How my life has changed! Now I’m divorced and  prefer living in the country but I live in a different big city in a different country (Canada) most of the time. But more about that later. Here’s the story:

It gets hot east of the Caldecott Tunnel in the summer. Unlike cool and insect- free San Francisco, we need screens on our windows.  In August, we have fans in every room. It’s a different world in the East Bay, one that I wasn’t prepared for.

More than twenty years ago, I lived in San Francisco’s North Beach at the top of the Kearny Street steps. On Saturday night, teenagers gathered to toss beer bottles and old TV sets down to Broadway. By early Sunday morning, I could sleep, comforted by the moan of the foghorns.

My husband had a Volkswagen bug that he moved only when the tires were chalked and he was in danger of getting a ticket. A parking place in North Beach was a precious commodity and not given up without a compelling reason. And never, ever, would he give up his space on a weekend.

A stroll down to Broadway was free entertainment. I once saw Enrico Banducci hold court in the now defunct café that bore his name. He sat at a table with a group of uniformed cops, one of whom was kissing his diamond ring. The theme song from The Godfather played in my head that day.

Past Enrico’s, the Barkers competed for the tourists’ attention, enticing them to come in off the street to enjoy the show. The best line I heard one of them sing out was, “Paul Newman, ladies and gentlemen— wrestling naked in a tub of sour cream.”

Movies were filmed from my front porch. The crews blocked my front door and the trailers commandeered the best parking spaces. In Foul Play, Goldie Hawn swept Billie Barty from her second-floor window while I watched from across the street. The film crew hosed down the Kearny Street steps before George C. Scott strolled up when he starred in Hardcore. My building was featured in Woody Allen’s, Play It Again Sam. Every time it was on TV I watched it if only to remember that I lived in a famous building, in a famous city.

In the mornings, I strolled down the hill on my way to work at B. Dalton Bookseller in the financial district. The local street people woke up early to claim their turf.  We soon recognized each other and exchanged pleasantries. Some of those transient souls lived in the storefront residence hotels that lined Kearny Street.

Leaving San Francisco was the only way my husband and I could afford to buy a house. Pioneering friends who migrated to the suburbs before us soon became city-phobic. Though we made expeditions to visit them in Orinda, Concord and Pleasanton, conversations built around drought resistant plants and little league politics didn’t hold my attention for long. We soon lost contact.  Could I resist becoming like them? I was soon to face my own hypocrisy.

After our son was born, we left North Beach and moved to the East Bay. On weekends, I met other mothers in the park. They looked horrified when I questioned them about daycare and babysitters.  They told me that they stayed home with their children, unlike me.

It was three miles from my new house to the nearest store. I had to learn to drive a car.  Once I got to the store, I discovered that I was dressed all wrong. I didn’t own a casual wardrobe. I dressed in business attire or grubby, paint-splattered sweats. I felt my new neighbors looking at me.

I fantasized about running away, back to San Francisco. On Sunday mornings, I read the “apartments to share” ads in the San Francisco Chronicle. “SWF wanted to rent large room in Richmond District house—private bath, non-smoker, no pets.” I imagined gazing out fog-shrouded windows or strolling to Clement Street to haunt my favorite bookstore.

When I planted pansies for the first time, I was outraged when someone plucked the flowers tops. I complained to my husband about the flower thief, but he laughed. 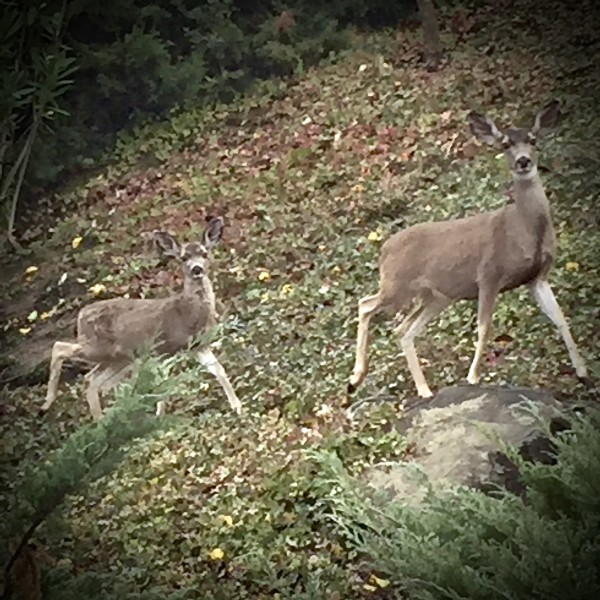 Deer in the Morning, East Bay

“ I think your criminal is four –legged. Probably deer.”

“Deer? As in Bambi? Grazing on my front lawn? Should I get a salt block and put out water?”  I still had much to learn about living in San Francisco’s East Bay.

In time, I adjusted to my new life. Besides gardening, I learned to appreciate the joys of dog ownership, as well as the warmer, fog-free weather. I bought some khaki pants and Rockports. My neighbors stopped staring.

Recently, I enjoyed the luxury of an afternoon to myself in San Francisco. The  apricot-tinted light reflecting off the pastel buildings reminded me of the first time I  glimpsed the city.

The cable car ballet continues to be performed for the tourists at the turnaround on Market Street, christened “Nut Boy Plaza” by my husband. Local characters still help the conductor rotate his car. Only the price of a ticket has changed.

As BART snakes under the Bay, taking me home to a different culture and climate, I realize how much I  miss the diversity and utter craziness of life in San Francisco. That’s where I feel most at home.

The vacation I dream of isn’t the white sand beaches of Maui or Cabo San Lucas. I lust after a week at the Mark Hopkins Hotel, re-experiencing the city, as a born-again tourist. 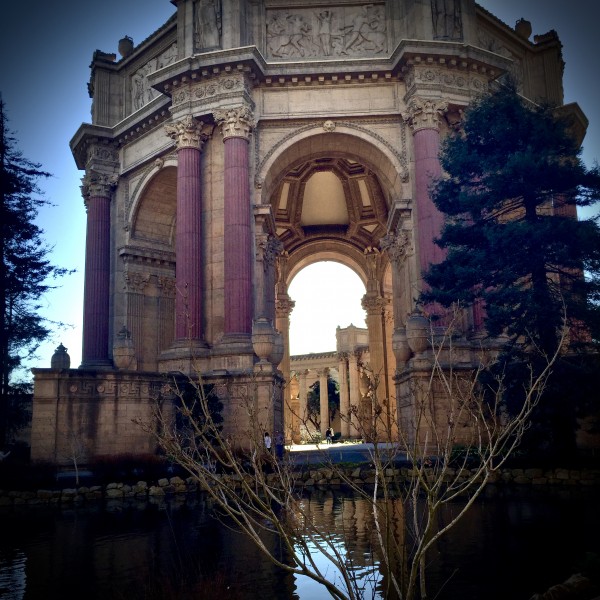