In the Italian Language, The H is Silent

When I told my Italian friends, I was going to Genoa specifically to see the Monumental Cemetery at Staglieno they expressed disbelief.
“But of course, you will visit the aquarium? You must take the time to see San Lorenzo cathedral and the national gallery in Palazzo Spinola!”
Information about visiting cemeteries is not in most guidebooks. I am part of a small but dedicated minority who visit cemeteries wherever we go in the world. Staglieno is not far from Firenze where I was living and the trip gave me the opportunity to see the coastal towns on the way. 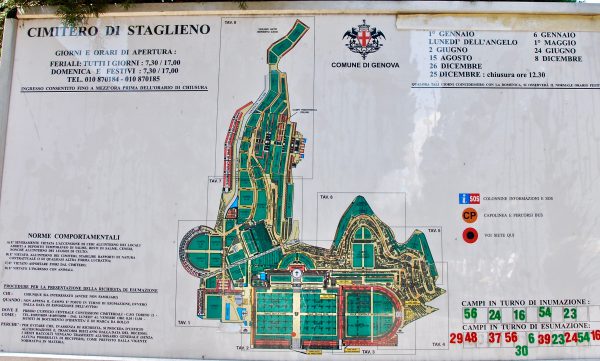 Once I entered through the gates of Staglieno, a middle-aged man approached me and offered to be my guide. Mario’s fee was ten euros for an hour and he spoke only Italian. Delighted that I would have a chance to further develop my Italian listening skills and at the same time learn about the cemetery, I agreed. 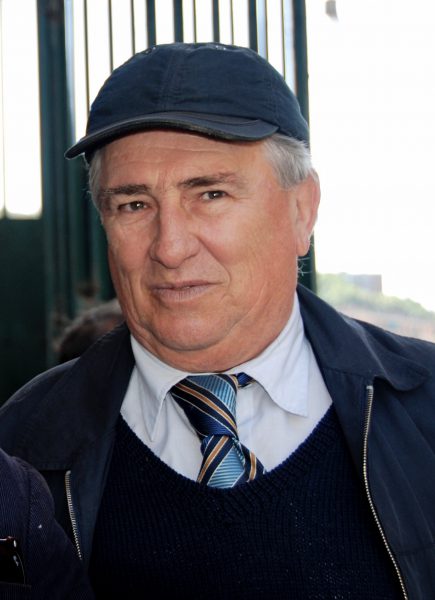 Mario was passionate about the art and history of Staglieno. He was also a close talker with breath that smelled like one of oldest residents of the cemetery. When I backed away, he stepped closer.
He said, “The marble from Carrera is very porous and absorbs dirt, smog and over time turns various shades of smoky grey. Though the city installed bathrooms in the cemetery, it didn’t pay for restoration work. That is the responsibility of the family who owns the grave.”
Clearly, some families have stopped caring for their relative’s final resting place yet many monuments were lovingly intact and works of art on their own. 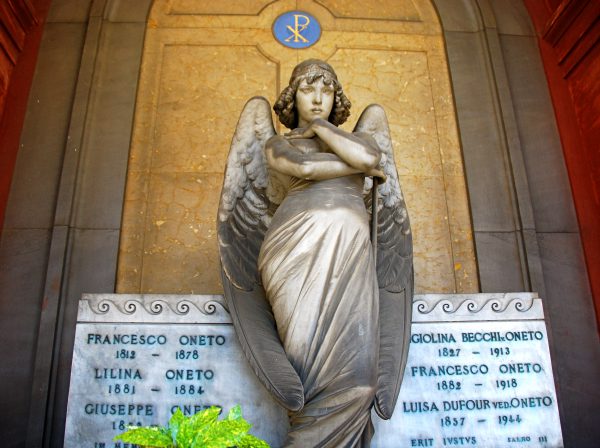 When my hour was with Mario was over, I headed to the section I had noticed marked Israelites. Here most graves were overrun with weeds. Broken headstones were common. On only one grave, I recognized the ancient Jewish tradition of placing a pebble on the headstone to show that someone had visited.
Many of the graves were so eroded by time you couldn’t tell who was buried there or for how long. Even with my limited Italian, I could understand the headstone of Maurizio Wax: 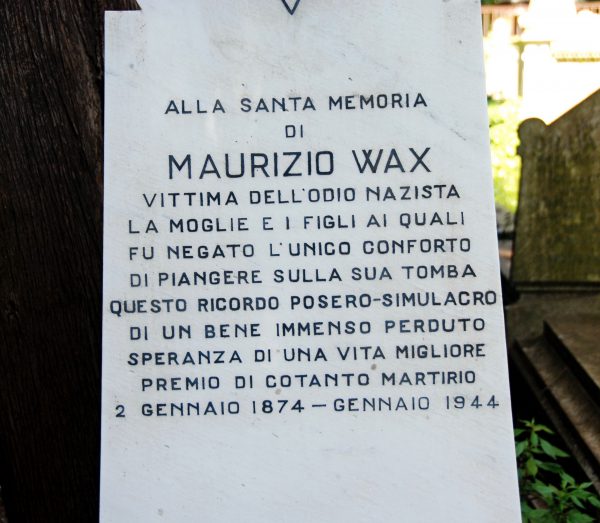 Broken headstones, decaying plastic flowers and even an open grave made me imagine it was still 1943 after a group of Blackshirts had ransacked the place on a Saturday night. 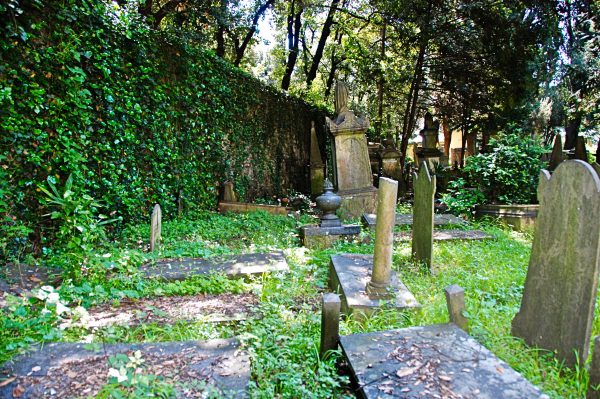 I had been in Italy for four months studying Italian and failing to find good reasons why I shouldn’t live here for the rest of my life. I had visited the lone temples in Rome and Florence, as well as the tiny synagogues high above the square in the Ghetto of Venice. 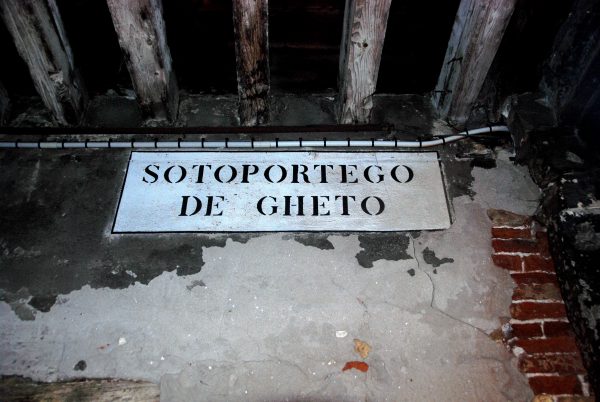 The Jewish population had clearly been decimated by the holocaust and immigration. The families that remained in Italy were trying to rejuvenate, welcoming tourists into their temples, establishing museums and even opening a few successful kosher restaurants.
The Italians I met were embarrassed to discuss their country’s role in the holocaust. Everyone had family who fought in the resistance and saved Jews. In La Piccola Gerusalemme in Pitigliano, there is only one Jewish resident remaining. The sign outside the synagogue read:

The building was almost totally rebuilt in 1995 having fallen down during the sixties after it had been left because of the extinction of the Jewish community in Pitigliano. 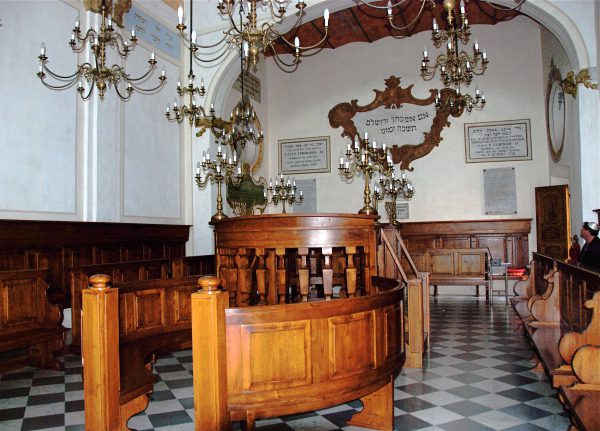 After this trip to Staglieno, I continued further north, near the Austrian border. I found the mountain scenery breathtaking, especially as I watched a train weaving its way in and out of the tunnels carved into the rock. But I could imagine the boxcars loaded with Jews going through the small villages on their way to the death camps. 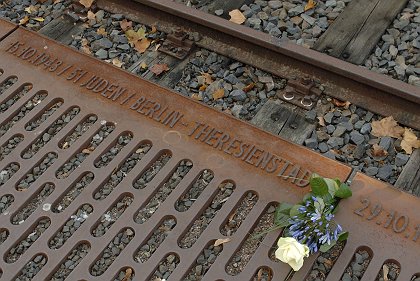 I read about The Memory Train, a travelling installation in a vintage steam locomotive hauling two carriages containing pictures of child Holocaust victims. It toured German cities and reached Auschwitz on May 8, 2008. When it stopped in Berlin, people waited in line for four hours to see the train.
The state funded Bahn Rail Company, also the train provider of Nazi Germany, has charged the organizers of The Memory Train a steep toll to park the train in the station. A Bahn spokesman said, “The company had to treat all customers equally and not allow some a free ride.”
When I studied the Italian alphabet, I learned that the letter H or ache is always silent. It’s there, but not ever pronounced. Much like (h) olocasto, (H) itler and (h) ebreo. 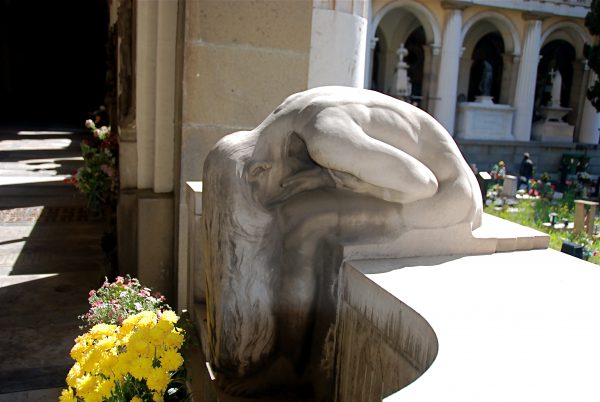